Here in the northern hemisphere, we find ourselves on the boundary between autumn and winter. This is yet another potent in-between time. As the sunlight fades away and our nights begin to lengthen, the ancient Celtic people celebrated Samhain (Sow-in).  Some tribes celebrated Samhain at the 1st new moon after late harvest (October 25th this year). Other tribes chose to celebrate at the 1st full moon after harvest (November 8th this year).

The Celtic celebration of Samhain was a way to acknowledge and honor the transition out of the light half of the year and into the dark half.  The Celtic people believed that the veils between this world and the next are very thin at Samhain. Those that have departed this Earth are close at Samhain. This made it the perfect time to celebrate the gifts of the ancestors, and to celebrate the endless cycles of birth – growth – death – rebirth that are an integral part of Nature.

In this sacred and magical in-between time, spend a few moments acknowledging and honoring all that has happened in the past year.

Honor everything you have “harvested” this year.

Consider what you hope to “birth” and “grow” in the year ahead.

Bow to your ancestors and thank them for giving you this life.

Offer love and prayers to loved ones who have transitioned.

Thank the light of summer and embrace the dark of winter.

Celebrate the Magic of Samhain.

Here in the Northern hemisphere, we are entering into the Lughnasa festival days. Lughnasa (or Lughnasadh) is a traditional Celtic celebration time that marks the beginning of the harvest season in the northern hemisphere. Lughnasa was celebrated in early August all over Ireland and Scotland for centuries.

Legend tells us that the ancient Celtic God Lugh created this harvest festival time in honor of his Earth Goddess Mother Tailtiu. Traditional Lughnasa rituals included an offering of the first of the corn, harvest feasts, athletic contests, bull sacrifice, and ritual dancing. The Lughnasa custom of climbing hills and mountains has survived in some areas to this day.

Now is the perfect time to honor the abundance and harvest in your life. Offer up your gratitude to Earth and Sky for the good things that have shown up in your life this year. Honor everything from your garden harvest to new friendships, children’s milestones, new jobs, your health… any and every bit of abundance in your life.

Today marks the cross-quarter day (halfway point) between Fall Equinox and Winter Solstice in the northern hemisphere. The wheel of the year turns and the entire northern half of the planet enters into the dark part of the year. It is the time of year when the Sun drops lower and lower on the horizon, and the dark of night lasts longer and longer.

Ancient Celtic tribes celebrated Samhain (pronounced sow-in) to mark this auspicious time. According to the Celts and other pagan tribes, the veils between the worlds grow thin at this time of year. That means we can more easily connect with loved ones who have crossed over into the land of the dead. It is the perfect time to honor and celebrate our ancestors.

Celtic Samhain is also about celebrating life. The last of the harvest has been gathered up in our fields and orchards. The natural bounty of Mama Earth will bless and nourish us all winter.

As you enter into the dark half of the year, pause for a moment or two. Offer love and gratitude to Mama Earth for the water, food and shelter she provides. Say a prayer for any loved ones who have moved beyond here and now. Express thanks for everything you have harvested in your life this year.

May the Spirit of peace
bring peace to your house
this Samhain night
and all nights to come.

We honor the fertility and magic of Nature

on this day the Celts called ‪Beltane‬.

Even with snow on the ground here in the Rockies,

the flowers are in bloom!

“Beltane is so much about the urge to connect, to blend and merge;
to feel a part of something extraordinary; to at once lose one’s sense of self in that merging
but also to paradoxically feel more absolutely and truly oneself because of it.
In the desire to penetrate life’s mysteries, we need also to open ourselves to them,
surrendering to the power of love that it may have the opportunity to transform us.

Great things are born in us at such moments of union;
this place of merging is where the tap root of our creativity feeds,
without it we feel dry and disconnected.


If that magical, alchemical moment of connection and merging were a colour,
I suspect it might be perceived as many beautiful, vibrant shades but its foundation,
I feel sure, would be the green of spring: ecstatically joyful –
the irrepressible life and desire that leads us to love.”

At the beginning of February, we celebrate a strange and wonderful holiday known as Groundhog Day. We are told that if the prophetic groundhog, Punxsutawney Phil, sees his shadow on this day and runs quickly back into his burrow, winter will last at least 6 more weeks. Today Phil did NOT see his shadow, thus predicting that winter will end soon. How ironic that this prediction occurs when much of the country is buried under piles of snow!

The idea of waiting and watching for the first inkling of spring is not new. The ancient Celts celebrated Imbolc in early February long before Groundhog Day existed. Celtic stories tell us that the Cailleach—the divine hag Goddess who rules over winter and death—gathers firewood for the rest of the winter on Imbolc. If the Goddess Cailleach wishes to make the winter last a lot longer, she will make sure that the weather on Imbolc is bright and sunny, so she can gather plenty of firewood. But, if Imbolc is a day of foul weather, it means the Cailleach is asleep and winter is almost over.

The Cailleach was worshipped by the Celts as the sacred Earth Mother herself in her bare winter form. And she is not just a dark and evil hag who arbitrarily decides how long winter will be. The Cailleach is also the Bone Mother who collects the bones of the animals that die in the winter. The Bone Mother is said to sing or pray or sleep over the bones all winter long. She does this out of love, so that the animals will cross over and can return as new life in the spring.

The Celtic tribes lived in the far north where winter is a brutal season. They had to burn huge quantities of wood to keep from freezing every winter. They also had to rely on their own stores of food to get them through the long winter months when no crops could be grown or harvested. There was no corner grocery store to run to if they ran out of bread. Is it any wonder that the Celts were quite focused on the return of spring?

The Celts watched and waited for spring. And they noticed that the ewes began to lactate and prepare for the birth of their lambs in early February. The Celts saw this return of mothers’ milk as reason to celebrate. The flow of milk and the birth of baby lambs meant spring was definitely on its way. The harshness of winter would soon end. The Celts celebrated Imbolc because they understood that their lives depended on the grace of Mama Earth and her seasons.

There is a magic to Imbolc and the early days of February. It is there, running just beneath the surface. Can you sense it? Mama Earth holds the seeds of spring safe for us all winter. As the cold wind blows and the snow piles up, she holds them safe in her soil. Now it is February, not quite time for the seeds to sprout. But the days are definitely lengthening. The wheel of the year is slowly turning towards spring and new growth. And beneath the surface of Mama Earth, the seeds are beginning to quietly stir. Spring is stirring in the ground beneath your feet. Listen with your heart. Can you hear the stirring?

Imbolc is traditionally celebrated at the halfway point between winter solstice and  spring equinox.  In 2016, this halfway point falls on February 4.  Here is a way to celebrate Imbolc at your house: Light a candle or two tonight. Then offer up a simple prayer of gratitude in honor of Mama Earth and the return of spring. 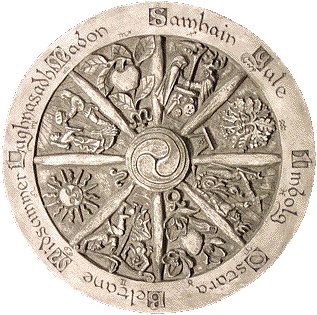 As the days grow short and the nights lengthen in the northern hemisphere, the ancient Celtic tribes of Europe used to hold a celebration they called Samhain (sow-in).  The Celts celebrated Samhain to mark the turning of the Wheel of the Year. At Samhain, the entire northern hemisphere officially enters into the dark half of the solar year. This is the time of year when the sun seems to turn away, and night lasts longer and longer. The dark half of our solar year officially begins on November 6th this year.

Samhain actually marked the beginning of the Celtic New Year in times past. At Samhain, the Celts paused and took time to reflect on the past and plan for the new year. They also believed Samhain was a time to connect with and honor loved ones who have crossed over into the land of the dead. And halfway across the world, the people of Mexico and Central America still celebrate Dia de los Metros (Day of the Dead) at this time of year.

Celtic Samhain is not just about celebrating death and those who have passed beyond. It is about celebrating life. The last of the year’s harvest is being gathered up in the fields and orchards now. Samhain is the perfect time to express gratitude to sacred Mother Earth for  all the blessings and bounty she has provided for you and your loved ones.

May the Spirit of peace
bring peace to your house
this Samhain night
and all nights to come.