“Lammas, or “Loaf Mass,” is the Feast of the First Harvest, the Feast of Bread. This Holy Day honors the women who created agriculture and bred the crops we cultivate, especially the grains, or corn. In the British Isles, celebrants make corn dollies from the last of the newly-harvested wheat. The corn dolly holds the energy of the grain Goddess and, when placed above the door or the mantle, will bring good luck to the household all year.

But, did you ever wonder why it’s corn? “Korn” is an old Greek word for “grain.” Wheat and oats, barley and even rice, are korn. This usage is preserved in the song “John Barleycorn must die.” When Europeans crossed the Atlantic and were introduced to the beautiful grain the Native Americans grew, they, of course, called it “corn.” And nowadays we think of corn as only that, but corn is Kore (pronounced “core-a”), the Great Mother of us all.

Her name, in its many forms — Ker, Car, Q’re, Kher, Kirn, Kern, Ceres, Core, Kore, Kaur, Kauri, Kali — is the oldest of all Goddess names. From it we derive the English words corn, kernel, carnal, core, and cardiac. “Kern” is Ancient Greek for “sacred womb-vase in which grain is reborn.”

The Goddess of Grain is the mother of civilization, of cultivation, of endless fertility and fecundity. To the Romans she was Ceres, whose name becomes “cereal.” To the Greeks, she was Kore, the daughter, and Demeter (de/dea/goddess/meter/mater/mother) as well. To the peoples of the Americas, she is Corn Mother, she-who-gave-herself-that-the-People-may-live. She is one of the three sister crops: corn, beans and squash. In the British Isles she was celebrated almost to the present day as “Cerealia, the source of all food.”

Honoring grain as the staff of our life dates at least as far back as Ancient Greece. Nearly four thousand years ago, the Eleusinian mysteries, which were regarded as ancient mysteries even then, centered on the sacred corn and the story of Demeter and her daughter Kore or Persephone. Initiates, after many days of ceremony, were at last shown the great mystery: an ear of Korn. Korn dies and is reborn, traditionally after being buried for three days. Corn and grain are magic. The one becomes many. That which dies is reborn.

Many Native American stories repeat this theme of death and rebirth, but with a special twist. In some origin of corn stories a woman is brutally murdered, in others she demands to be killed. No matter. Once she is dead, she is cut into pieces and planted. From her dismembered body, corn grows. Again and again, everywhere around the world, the story of grain is the story of humanity. The sacred symbolism of grain speaks loudly to the human psyche. To the Ancients, the light in our lights is the Kore, the core, the soul, the seed, of each being.

… The green blessings of the grains are special blessings indeed.”

On August 7th, we will reach the halfway point between summer solstice and autumn equinox in the northern hemisphere. This is one of four “cross-quarter” days that occur in our annual trek around the Sun

Many of our ancestors celebrated the harvest at this time of year. The Celtic people in the British Isles paid homage to the Sun God Lugh at this time. The first sheaf of wheat was harvested and ceremoniously ground and baked into bread for the festival of Lughnasadh. Bonfires were lit to honor the fiery energies of the Sun. The fruits of the harvest were celebrated and shared by everyone.

Later in Britain, the festival of Lughnasadh became Lammas Day. The festival of Lammas was held to honor the wheat harvest. The word Lammas comes from the Anglo-Saxon hlaf-mas  or  “loaf-mass.”  On the day of Lammas it was customary to bring a loaf of bread made from the new crop to church in celebration and gratitude.

Many centuries before Lugh or Lammas existed, the Goddess Arinna was worshiped by ancient tribes living in the region that is now Turkey (1400 BCE).  Arinna was their main solar deity and her consort was the weather god, Teshub. Arinna was honored for creating the natural abundance of our Earth and making human life possible.

Whether through honoring Arinna, Lugh or Lammas, our ancestors took time to express their gratitude for the bounty of the harvest every year. Their ceremonies were ritualized ways for the community to acknowledge and honor the food that grows when Father Sun unites with Mother Earth. Our ancestors lived closer to the Earth and the cycles of the seasons. They understood that all life on Earth depends on the magical union of sun, seed and earth.

What have you harvested this year? What are you grateful for? During this sacred time, take a few moments to express gratitude for all the abundance in your life.

And take time to thank Mother Earth and Father Sun for life itself.

Now is the time of first harvest in the Northern Hemisphere. Traditionally, our ancestors held festivals at this time of year to celebrate the bounty that Mother Earth and Father Sun create.

Take a few moments to pause and take stock of everything you have accomplished and “harvested” in your life this year. Offer thanks to our Earth and Sun for the life they offer us all.

It’s high summer – time to celebrate the old Celtic festival known as Lughnasadh in Ireland and Lammas in Britain – the traditional time of pilgrimage in the northern Celtic lands where for centuries people have rejoiced in the endless light-filled days by climbing sacred hills, drinking at holy wells, or voyaging to green islands set like jewels in a sunlit sea.

As we pause in our labours, celebrate the warm weather and enjoy the fruits of our daily work, we have an opportunity to take stock of what the seasons so far have yielded: to reflect upon our hopes and dreams that were sown in the dawn of the year, came to life in the springtime, and are now maybe ready to bear fruit. On the spiritual level, we can ask ourselves what wisdom we have garnered so far this year: What will be the harvest of our souls?

For as the wheel turns, the life-giving triumph of the harvest must give way to death, reminding us that nothing stands still, and that on the human level, for whatever is gained in our lives, there must be an equal giving-away, a sacrifice, so that cosmic balance and order can be maintained.

And The Shamanic Astrology Mystery School shares details about the astronomical and astrological significance of early August:

Lughnassadh  (pronounced Loo-nuh-suh) refers to harvest and victory and is usually celebrated on August 1 or 2 but the actual zodiacal cross-quarter is August 7 when the Sun reaches 15 Leo.

In 2018 on August 7 the Sun is within a couple of degrees of Retrograde Mercury at 17 Leo adding to this unusual Cross-Quarter Time.

The August Cross-Quarter marks the half-way point between the June Solstice and the September Equinox – an in-between time for gaining insight and/or inspiration. Said another way this is excellent time for divination, meditation, journeying and connecting with other forms of guidance. 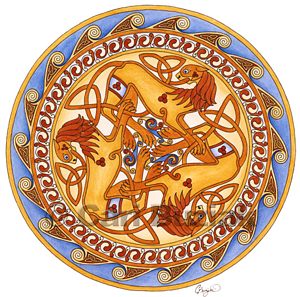 It is early August. Here in the northern hemisphere, we are in the midst of the hot, lazy “dog days” of summer. The expression “dog days” is believed to pre-date the Roman Empire. Our ancestors named this late summer season the dog days because at this time of year Sirius, the dog star, is closely aligned with the Sun in our sky.

The ancient Celtic people held the festival of Lughnasadh during the dog days of summer. It was their way of celebrating the start of the harvest season. Lughnasadh was typically held halfway between the Summer Solstice and Autumn Equinox. It was a time of gratitude for the bounty of the harvest season. In many villages the first sheaf of wheat was harvested and ceremoniously ground and baked into bread for the festival of Lughnasadh. Bonfires were lit to honor the fiery energies of the Sun. The first fruits of the Earth were harvested and shared.

Later in Britain, the festival of Lughnasadh became Lammas Day. The festival of Lammas was held on August 1st in honor of the wheat harvest. The word Lammas comes from the Anglo-Saxon hlaf-mas  or  “loaf-mass.”  On the day of Lammas it was customary to bring a loaf of bread made from the new crop to church in celebration and gratitude for the harvest.

Lughnasadh and Lammas are both ritualized ways for the community to acknowledge and honor the food that grows when Father Sun unites with Mother Earth. Our ancestors lived closer to the Earth and the cycles of the seasons. They understood that all life on Earth depends on the magical union of sun, seed and earth. In these modern times, it is easy to forget that all of our food comes from the bounty of Mama Earth. Every morsel is a gift from the Sun and Earth, even if purchased wrapped in cellophane at the local grocery store!

All of our clothing and shelter are also gifts from this sunny planet, as well as the oxygen we breathe. We have come a long way from the times of subsistence farming, yet we are still the children of Mama Earth and Father Sun, completely dependent on their gifts for life. And pausing to acknowledge and honor the start of the harvest season can be a wonderful way to reconnect with the beauty and bounty of Mama Earth.

Take a few moments in early August to connect with Mama Earth and Papa Sun. Offer up a simple prayer of thanks to Earth and Sun for all that you have in your life. You can also create a simple harvest ritual of your own. Just focus on giving thanks for this year’s bounty.

Your personal “harvest” may include more than just the food you eat – what else has come to fruition for you this year?  Perhaps you have a new job or a new family member. Maybe you made progress on a project near and dear to your heart. Or perhaps you’ve found peace in a troubled part of your life.  Take a few moments to honor all the gifts that you have received this year.